Granada is found at the foot of the Sierra Nevada; the ancient Iberian city of Iliberri, which would subsequently be transformed into the important Roman city of Florentia Iliberritana and after the Muslim occupation of the peninsula it would be Garnata, capital of the last Spanish-Muslim kingdom of the Iberian peninsula, the Nazrid kingdom, which would last until the end of the Muslim occupation, after which the new modern state resulting from the unification of Castile and Aragon transformed it into a European Renaissance city, in the image of the new European cities, but with great respect for the deep antiquity of its roots.

The Iberians called it Iliberri, the Romans Municipium Florentinum Iliberritanum, the Visigoths Florencia, but in 1013, when the Berber dynasty of the Zirid established its taifa there, the city was expanded and the ancient Iberian and Roman city was refortified and new defensive belts were raised.

As a prestigious vestige of Spanish-Muslim architecture, the Alhambra and its fortress dominate, from the hill of the Sabika, the old and picturesque quarter of the Albaicín, the primitive centre of the old city, and the nearby plain of Granada, which must have already been an orchard in the Roman era. 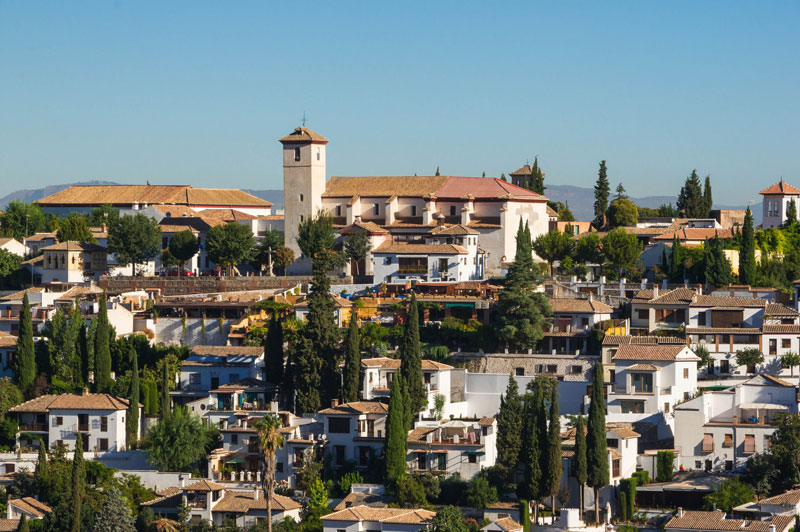 The Albaicín quarter was declared World Heritage Site in 1994 by the UNESCO. Its narrow streets, with a popular and intimate charm, invite strolling and discovering the city.

Along its lower border, during the Renaissance, a new street was built in an area not occupied by houses, which is the most emblematic representation of present-day Granada: the Carrera del Darro, at the end of which is found the Paseo de los tristes [Walk of the Sad]. This street lets one see the course of the River Darro, formerly the Roman Dauro, with two bridges of tile and carved stone that connect the hills of the Albaicín and the Alhambra, and that generate one of the most representative images of Granada of yesterday and of today.

The Mozarab pilgrims during the Muslim occupation, and later after the Reconquest, began in it the current Mozarab Way, one of the principal routes for pilgrimages to Santiago de Compostela, and its beauty is such that it inspired the famous poet of Granada, Federico García Lorca.

The Palace in which the PATIO DE LOS PERFUMES is located is an archetypical example of the classicist image that the city of Granada was given during the Renaissance transformations that began in the 16th century. It was built by the Marqués de Sálar, great-grandson of both Hernán Pérez del Pulgar (known by the name of El de la Hazañas [The One of the Valiant Deeds]) and Gonzalo Fernández de Córdoba (El Gran Capitán [The Great Captain]), Captain-General of the Castilian-Aragonese forces that finalised the Reconquest of the peninsula.

Therefore, its Palace could not be less prestigious than the importance of his ancestors. Built on two floors with a surface area of 1500 m2, it follows the archetypical architecture of the Renaissance palace of the classicist transformation of Granada, with a majestic patio of more than 130 m2 and two large salons open to the patio.

During recent decades the building has been abandoned due to the difficulty of incorporating new uses of contemporary times.

For the renovation and realisation of our magnificent project, we have fully respected the essence of the building, its structural evolutions and the know-how of traditional craftwork.

We are proud to open to you the doors of the PATIO DE LOS PERFUMES, an essential place and reflection of the charm of the past and of the current elegance at the same time.